ANALYzING YOUR ELECTRIC BILLS AND Consumption

Probably not. But that’s useful to know it and to compare such energy costs with the national average or other benchmarks. That’s part of energy improvement strategies.

It’s important to know the composition of your electricity costs and possible hidden energy wasters; and to achieve it you have two good tools: your utility bills and power monitors.

Review your electricity bills. That’s important. Take a careful look at them. See if your utility bills include a recap of the last twelve months. If not, gather the bills of the last year (or if you haven’t a complete set of bills, call your company and ask them a year’s worth of records), and make some basic calculations.

Energy auditors always ask for electric bills, to analyze them. You may learn a lot more than you think.

These two types of power consumption and the costs associated to them can be very helpful. You can compare them with national averages or with those of your neighbors and friends, or with some benchmarks.

These comparisons can help you to identify areas of excess power use, or to evaluate the most effective energy improvements.

Supposing, for instance, that your heating bills are 5 times greater than your cooling bills, you may conclude that you will benefit more from adding insulation or undertaking sealing improvements (to reduce your heating needs) than from installing shading devices or replacing your old windows.

As mentioned, once estimated your baseload costs and your seasonal (heating and cooling) costs, you would have to compare them with national averages or other benchmarks, in order to find areas of excess energy use.

We show some of these state averages below (graphic from EIA). And also a table with some key average figures, involving the USA household energy consumption. But be aware, when comparing your own energy bills with them. Do not be fooled by very general and broad averages. Energy costs vary a lot with the climate, the number of occupants and the size of the house, or with the type of equipment.

Being in the average range, or even a little better than the average, may not be good... American homes are, on average, very inefficient. If you want better benchmarks you need to consider Energy Star homes, or A-rated homes in Europe, or 6+ Star Australian homes (see: Buying New Homes). Or the German and Austrian standards for passive houses.

And what that means exactly? That you should consider a reduction of 30-50% in the power consumption (Energy Star homes can achieve such standards); or a reduction of 75% or 80% (German passive house standards). The table at right shows these benchmarks.

Obviously, once again, these figures are very general. We are not taking into account factors like the climate or the number of people in the house. But though too general and with limitations, they are good benchmarks.

Also consider using power monitors. They are relatively inexpensive ($15-$30 online, for some models) and will help you control the electricity consumption of your dishwasher, TV, refrigerator, PC or whatever appliance or electronic device...

Most homes have unsuspected energy wasters, and products like P3 Kill a Watt, the Black & Decker Power Monitor and other similar devices will help identify them. For prices and reviews at Amazon.com, see Power Monitors 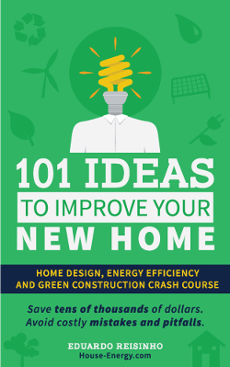